A Countdown to Final Ragnarok short story
By Dan Wright
It had been several hours since Benji had heard anything from his mother. His feet dangled in the air as he sat back as far as he could, hands tucked under his legs. Wispy lay curled up beside him, having one of her many catnaps. Benji looked up at the door ahead, but it had yet to open. The screams had stopped now, but that only made Benji more anxious. At least then he knew his mother was alive – but now there was only silence. Every time he looked at the unclosed door, he feared the worst. People often said that ‘no news is good news,’ but that only depended on the news that you wished to hear. Benji’s heart wasn’t sure if he could take anymore.

He just wished someone would tell him… anything.

Wispy showed teeth as she let out a yawn, stretching herself and making her fur stand on end. She looked up at Benji, noting his pinning expression. Wispy didn’t even know if Benji realised she was still there – and she thought better than to get his attention. She did think about giving him some words of encouragement; but when Benji was like this, it was hard to rouse him.

Poor kid, she thought. He gets so worked up when he’s worried.

Though she often teased Benji, she did care for him greatly. It was because of his family that she had a space to stay and she would be forever grateful for that. She hated seeing him like this, and was every bit as worried as he was, even if she didn’t show it as much as Benji did.

A blast of frantic air followed the violent opening of the doors. The silence that had preceded it was such that it made the sound of doors opening like the crash of thunder. Kalak stood behind them, his blonde hair dripping with sweat and a desperate look in his eyes.

This was the news that Benji had feared, he knew it. He jumped from his seat and ran towards Father, tears starting to fill in his eyes. “Dad? What’s wrong? Is it Mum? Please?”

Kalak seemed much calmer now for some reason, a sudden shift in the terror that he alluded moments before. Or was that just Benji’s fear that made him see things that weren’t there, or forced the doors open with such intensity?

Whatever the reason for Benji seeing what he saw, it was not the reality.

Kalak placed two hands on Benji’s shoulders and he looked up. The desperation he thought was in Kalak’s eyes was actually tears – happy tears, as evidenced by his smile. It always seemed strange to see a man of Kalak’s muscular frame weep, but it was comforting in a way.

Benji barged past his father into the room, Wispy on his shoulder. Harrison and a few doctors (dressed in white) washed their hands in a bowl of water, whilst others cleaned down the bed that Queen Daniar had used moments before. The Queen was sat in the corner on the most comfortable chair they could find. She was half-way between awake and sleep, with a laconic smile on her face.

Curled up in her arms was the tiniest human being Benji had ever seen. Wrapped in a red blanket, the human gurgled and cooed, sleeping like the thing it was.
Daniar saw Benji and held out a hand to him to beckon him forward. Benji moved closer without hesitation. “Benji,” Daniar said quietly, too exhausted to even talk, “meet your new sister, Rosa.”

“We named her after Daniar’s mother,” Kalak said.

Benji put his hands to his mouth and let out a tiny gasp. “She’s beautiful.” He turned to Kalak. “I have a sister.”

“You do,” Kalak said, too emotional to form full sentences.

Daniar smiled, the only one not crying. But only because her tears had come when Rosa was first introduced into the world. Now she was content to just lie back, holding her baby in her arms. She stroked Rosa’s forehead, where tiny strands of red hair were already sprouting. She and Kalak had been trying for years for a new addition to their family – and now they had been blessed with one.

Thank you, Dronor, she thought.

Rosa opened her eyes about half-way – where the family could see tiny bits of brown forming. Rosa sighed lightly, her first gaze of the two men in front of her – their eyes soaked with tears – and a tiny cat that also seemed to be crying. These were the ones she would soon come to call her family. The ones that would be in her life for as long as they could be. Through them, she would learn what love was.

Rosa then turned to a dark corner of the room, where two bright flashes of white appeared. They then vanished. No one else but her seemed to notice. 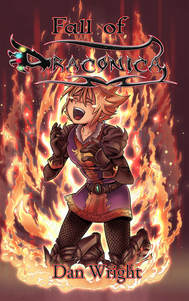